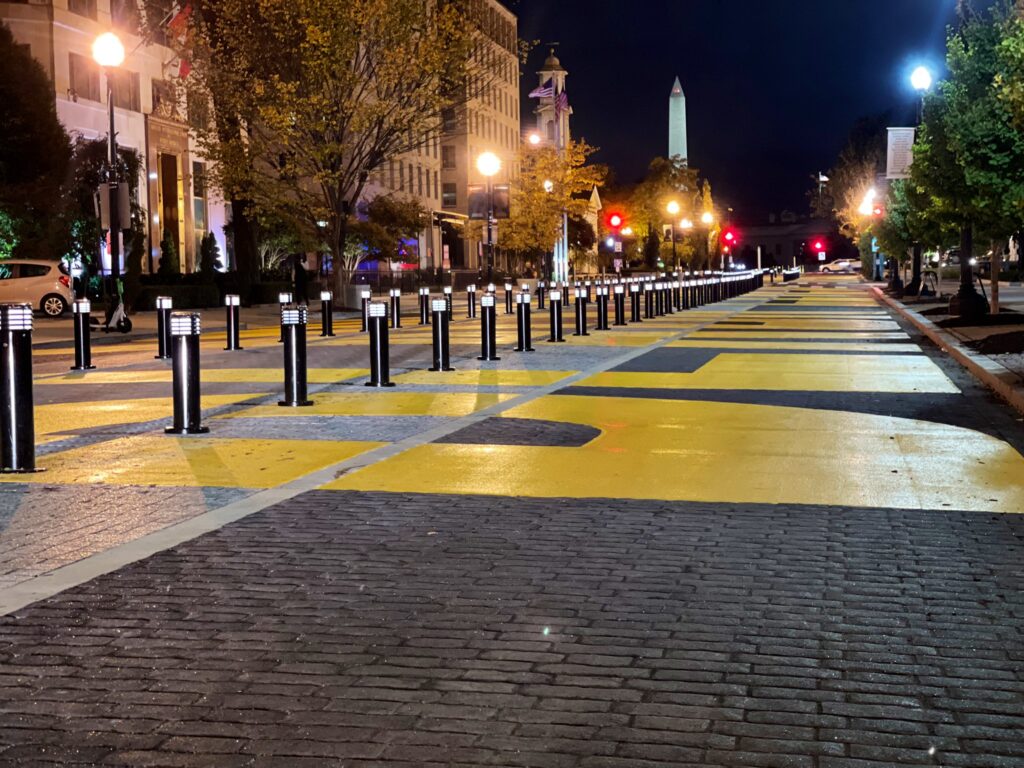 From a press release:

“Mayor Muriel Bowser and the District Department of Transportation (DDOT) announced that the construction of The district’s permanent Black Lives Matter Plaza monument on 16th Street between K Street and H Street NW has been officially completed.

In June 2020, Mayor Bowser unveiled the iconic art installation on the two-block stretch of 16th Street NW leading to the White House, transforming it into a pedestrian zone and naming the area Black Lives Matter Plaza. The mural was unveiled just four days after unidentifiable federal forces roamed local DC streets, and peaceful protesters protesting police brutality and racial injustice were met with violence and tear gas between Lafayette Park and St. Louis. John’s Church, near the present site of the square. The iconic mural was created overnight by the Department of Public Works and the MuralsDC team, whose efforts were supported by DDOT. Mayor Bowser also officially renamed the segment of 16th Street NW to Black Lives Matter Plaza NW, which was approved by the Council of District of Columbia in October 2020.

The 48-foot-wide mural would become a permanent installation with a redesign of the road section of the project to accommodate vehicle traffic and serve as a safe gathering place for pedestrians who want to fully experience the impact of the mural.

“With 16th Street NW as a critical federal highway route and the necessary collaboration between all local stakeholders, this was a very large and prominent project for our team,” said DDOT Director Everett Lott. “We are very proud that, with the support of the Mayor, we were able to implement an accelerated work plan and so quickly deliver it as a national landmark for all to enjoy.”

In July 2021, construction began on the permanent installation, which included the following: