Büro Ole Scheeren’s residential house Fifteen Fifteen skyscraper in Vancouver, which will have a characteristic shape with several stacked boxy volumes, has taken a step closer to reality as the pre-sale of apartments begins.

The sale opens in November 2021 for apartments in the proposed 42-story Fifteen Fifteen residential tower at 1515 Alberni Street in the Coal Harbor neighborhood.

Developers Bosa Properties and Kingswood Properties first unveiled the design in 2015, planned for the same location but with the address 1500 West Georgia Street.

The project should not be confused with a couple of similar towers designed by Büro Ole Scheeren for the city’s West End, unveiled in 2018 by the same developer, but still in application review.

Fifteen Fifteen will include 202 condominiums, ranging from studios to three-bedroom homes. Among these, 18 Observatory Residences are located in the horizontally projecting parts of the building and four penthouse apartments.

The cantilevered sections of the Observatory Residences will be wrapped in floor-to-ceiling glass, designed to give residents the feeling of soaring over the city and countryside.

“The building actively positions the individual in its distinct community and embraces Vancouver’s breathtaking landscape.” 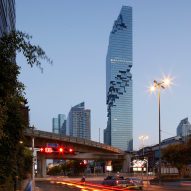 10 pixelated Jenga-style buildings that tick all the fields

The architect and his team will also design the interiors for the apartments, which complement the architecture and technique.

Among the range of amenities will be a lounge spanning the 29th and 30th floors, with 270-degree views of Vancouver.

Several buildings with stacked box-like elements have been proposed or completed in recent years.

Perhaps the best known is Herzog & de Meuron’s 56 Leonard skyscraper in Manhattan, with others, including The Interlace housing development in Singapore and the proposed overhaul of a Frankfurt office tower, both also by Büro Ole Scheeren.

The international company’s similarly playful skyscraper design includes the pixelated MahaNakhon tower in Bangkok and a couple of honeycomb-patterned buildings in Singapore – both of which were completed in 2018.

The pictures are by Binyan Studios.