Manchester City picked up Pedro Porro from Girona in August 2019, and less than a week later loaned him to Real Valladolid for the season.

When that loan expired, he was sent to Sporting, on loan for two years, which has a purchase clause they can use at any time before next summer.

Porro has excelled in Portugal and is now a full Spanish national team player. There is no doubt that Sporting will use their opportunity to buy, it has just been a question of when and what conditions will be included in the deal.

Tuesday’s edition of the Portuguese newspaper Record has an article about the situation, and explains that the paperwork to make the move permanent is expected to be signed after Sporting’s Champions League match against Besiktas on Wednesday.

Porro have already agreed terms with Sporting and now it’s just a matter of ending things with Manchester City. Although the Lisbon club have been looking for a € 8.5m fee rebate, it does not appear they are getting one. 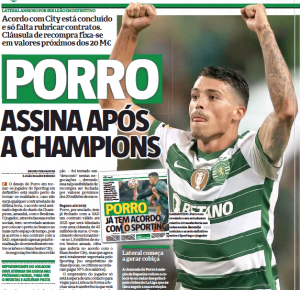 A buy-back clause ‘should close’ for around € 20m and Porro will have a release clause, applicable to any club, of € 45m.

It offers a big discount for Manchester City if they want to take the 22-year-old back in the future.