My personal style designation is a pair of pants from Vetra, a French workwear brand that uses a beautiful overalls dye. They were available for a year or so when I was in my 20s – it was a collaboration with J Crew – and I bought every pair in my size. I’ve lost some over the years, but at one point I had about 10 pairs, and I probably have about five or six left. I like to wear monochrome, so I usually combine them with Fedeli’s blue polo shirts in cotton terry. € 126

The last thing I bought and loved was a work by Canadian artist Zoe Barcza. It is a face that comes out of freely created ink stains that bleed out of paper. I bought it from Platform, the company I helped start that brings together young artists from independent galleries by curing a monthly selection of 100 new works of art.

And on my wish list is a bespoke suit. I’ve never had one. But I would love a beautiful blue suit from Huntsman in a light, breathable fabric that would fit like a glove. From DKK 3,500

I could not do without that gadget is my remarkable tablet-a digital notepad. I’m working on a book with Virginia Woolf’s art critique for David Zwirner Books, so I read the proof on my tablet. It makes things very hassle free. reMarkable 2, 399 kr

The place I can not wait to go back to is Giotto’s Arena Chapel in Padua, Italy, built in the 14th century. It’s powerful – you can see his whole vision. I first visited when I was 19 with my boyfriend at the time and I booked three times back-to-back.

And the best souvenirs I have taken home are postcards. There was a time when I had hundreds and I wanted to place them around my desk while I was a student at Yale. In the center was the main altarpiece in the Arena Chapel, which I surrounded with a mix of Northern and Italian Renaissance art. It was great to look at them while I was studying Greek and Latin.

My style icon is Samuel Beckett. He has a careless elegance I find captivating. I also love the rapper Cam’ron, who often dresses in pink monochrome – pink mink, pink sneakers, pink everything.

The best gift I have given recently is a medallion before 1910 from Gray & Davis, a vintage jewelry store in New York. Ali and Rick Miller, who run it, get incredible pieces from special periods, and this medallion was once an old watch chain with a picture of St George killing the dragon. Similar from $ 1,950

And the best gift I have received recently is a reissued Kareem Abdul-Jabbar Milwaukee Bucks basketball hat. The Bucks won the NBA Finals this year. I’ve seen them excited.

The podcast I listen to is Forgotten: Women in Juárez, a 10-episode series from iHeartRadio about a series of women who disappeared in Juárez, a border town in northern Mexico. It’s a really good piece of investigative journalism.

In my fridge you will always find lots of SodaStream bottles. I like water that you can carbonate yourself – it’s better for the environment. Since New York has reopened, I’ve eaten out a lot, so there’s not much else in my fridge. But if I am entertaining, I make a classic bolognese, even though I have recently added dried porcini mushrooms. SodaStream starter pack, £ 69.99

With time on my hands, I visit galleries on New York’s Lower East Side with my sister, Marlene. I especially love James Fuentes, Essex Street and JTT – we often do the rounds on the weekends.

The last clothes I added to my wardrobe was a pair of olive Air Jordan 9s. They were released for a year in 2012, so they are quite rare. Every few years I would see someone wear them, and this year I decided to stand in line for an hour outside the Flight Club, the sneaker store, and buy my own. I’m sure people will think I’m crazy about wearing them – most people keep them in shrink packs. From $ 661

An object I would never share with is a collage by Raymond Pettibon that I have known since I was 11. He used the cover of all these incredible books to make it – Shakespeare plays, Walt Whitman and Ruskin. I keep it in my living room.

The care pen I’m never without is Tom’s or Maine’s Wild Lavender deodorant. I do not wear cologne, but I love the scent of lavender, so I use it every day.

If I did not do what I do, I would do it be a novelist. There are definitely some bad book manuscripts in a drawer from my student days, and I’m just thankful that my real novelists discouraged me from pursuing publishing. Being an artist is a calling – you can not just be one. But I especially idolize writers.

The best book I’ve read in the past year is Netanyahus by Joshua Cohen, one of my friends. It is a fictional broadcast by Benzion Netanyahu, father of the recently ousted Israeli Prime Minister, Benjamin Netanyahu. It is dedicated to the late Professor Harold Bloom, and it ends with a beautiful memory.

A “find” recently is Buenos Aires, a restaurant near Tompkins Square Park in New York. It is an authentic Argentinian steakhouse with a fantastic backyard. You order steak, of course, but I also like to get mixed barbecue.

My favorite room in my house is my bedroom in Montauk. It has a balcony overlooking the ocean so I can hear the waves at night. It’s pretty extra – there’s a shelf of books over my head, a couple of side tables and a dresser. Then just a large sliding door that opens onto the balcony, the sea and the breeze.

I recently rediscovered that I like watching basketball. I was taken to see the bucks by the friend who gave me the Abdul-Jabbar hat, and I realized how much I like the camaraderie of being invested in a team. I played basketball in high school, but it hadn’t been a part of my life for a long time.

An indulgence I would never give up is Sprüngli chocolate. It’s a really good noisette chocolate with whole roasted hazelnuts inside. I like to have it after dinner.

The one artist whose work I would collect if I could is the Spanish painter of the 17th century Diego Velázquez. I recently saw his portrait of Philip IV from Spain as part of the Frick rehang at The Met Breuer building, and I was blown away. 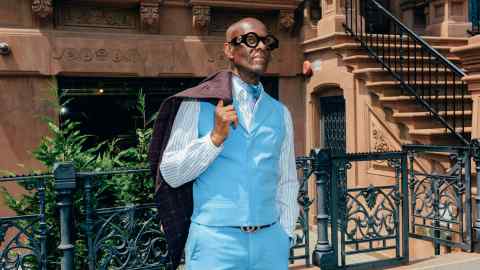 My nursing guru is my hairdresser Jason Kong. I do not know if I am particularly well groomed, but Jason has been cutting my hair for well over a decade. And now he has his own place in the East Village called Techni Salon.

The last music I downloaded was by American singer-songwriter Alice Smith. There was a great show at the new museum earlier this year, called Grief and complaint, and part of the exhibition was a video by filmmaker Kahlil Joseph. The film is a tribute to Alice Smith and Joseph’s brother who died around the time the play was made. Since I saw it, I have listened to Alice repeatedly; she has a great song called “Fool For You”.