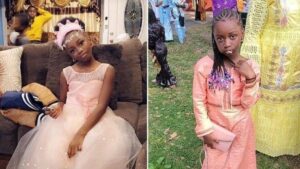 The Delaware County District Attorney’s office has filed for a grand jury investigation after it determined “with near certainty” that the bullets that killed 8-year-old Fanta Bility were fired by police officers.

Bility and three others were shot on August 27 after an altercation between several young men broke out in gunfire outside a football game at a Philadelphia high school. According to for CNN, what began as a verbal confrontation erupted as spectators exited the Academy Park High School stadium. When shots were fired during the altercation, officers outside the stadium opened fire on a car that had taken to the street.

The three surviving victims believed to have been hit by police fire were Bility’s 12-year-old sister, a 13-year-old boy and a 20-year-old woman who was a passenger in that car.

“Our initial ballistics analysis has concluded with near certainty that four of the five gunshot victims, including Fanta Bility, were tragically affected by shots fired by the Sharon Hill police officers,” DA Jack Stollsteimer said in a statement last week. “We are waiting for final forensic reports.”

Three officers have been placed on administrative leave while the investigation continues. Their names have not been released. Stollsteimer has petitioned the Judge for the President of Delaware County to convene a grand jury that would determine whether they have enough to file criminal charges against the offices.

In the meantime, the DA’s Special Investigation Unit is conducting additional ballistics tests, and former Philadelphia District Attorney Kelley Hodge has been called in to investigate the Sharon Hill Police Department as a whole and the conduct of the three officers in question.

The Bility family has hired Buce Castor, Jr., a former prosecutor, to represent them in the case. In a statement released after the family met Stollsteimer, Castor said they are “very pleased that the prosecutor is doing everything he should.”