By Christine Rendon For Dailymail.com

Bruce Willis and his ex-wife Demi Moore were pictured sharing a sweet moment with their daughter Tallulah as they gathered for an intimate family dinner on Monday evening.

Tallulah, 28, shared a photo of her embracing her mother as her father stood nearby, sharing a moment with Demi’s dog Pilaf.

The post comes nearly nine months after the family announced Bruce’s retirement from acting due to his aphasia diagnosis, a disorder that affects the sufferer’s ability to speak and understand language. 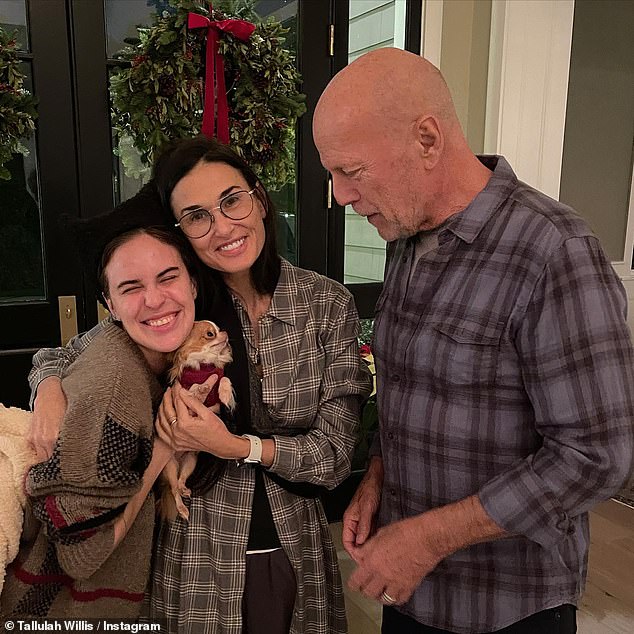 ‘I love my parents and my family’: Bruce Willis and his ex-wife Demi Moore were pictured sharing a sweet moment with their daughter Tallulah as they gathered for a family dinner on Monday evening

Tallulah couldn’t have looked any happier snuggling her mother as the two held the tiny chihuahua in their hands.

Adorably, Pilaf and Bruce seemed captivated by one another as they stared at one another.

‘the laser beam communication between Pilaf and Papa is stunning,’ Tallulah wrote in the caption, referencing their precious stares. 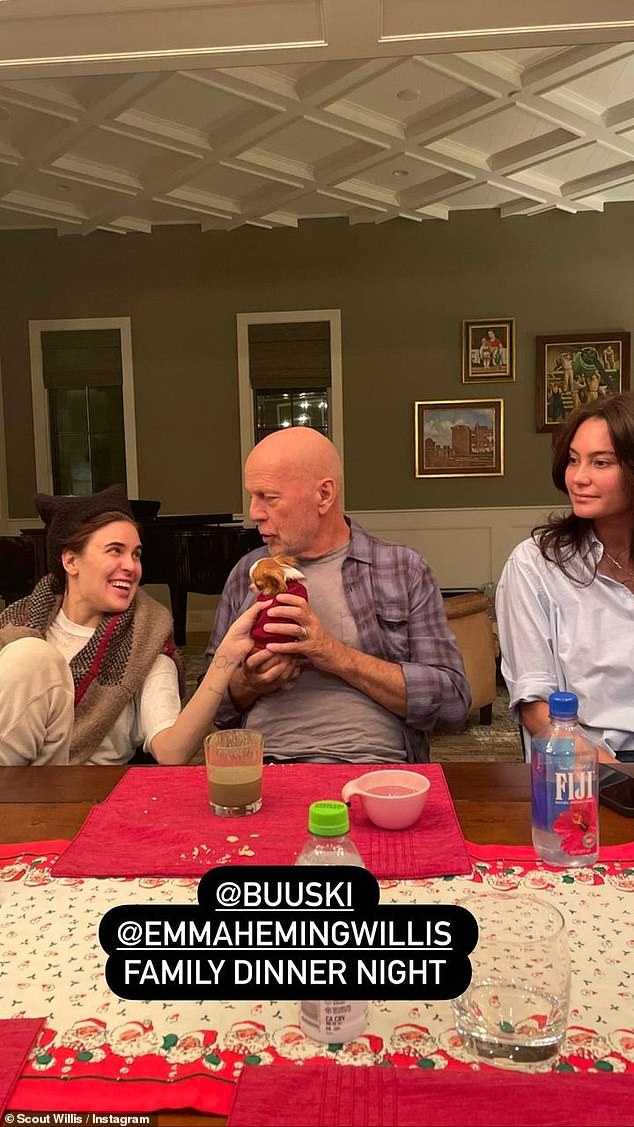 Let’s get together! Scout Willis also shared moments from their festive family gathering 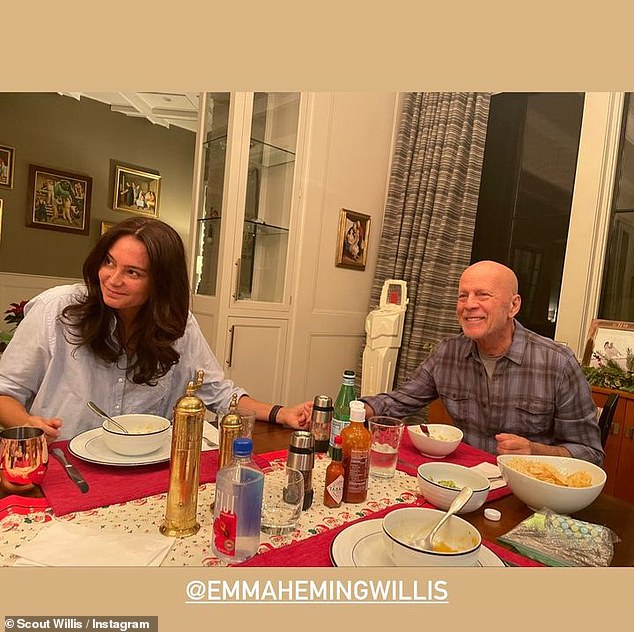 Aww! Emma Heming held hands with her husband as they sat beside one another

She shared a photo of Bruce, tenderly clutching Pilaf, as he sat at the dinner table with Tallulah and his wife Emma Heming Willis.

‘Family dinner night,’ she wrote in the photo.

Scout also shared a photo of Bruce tenderly holding hands with Emma as they sat next to each other at the table. 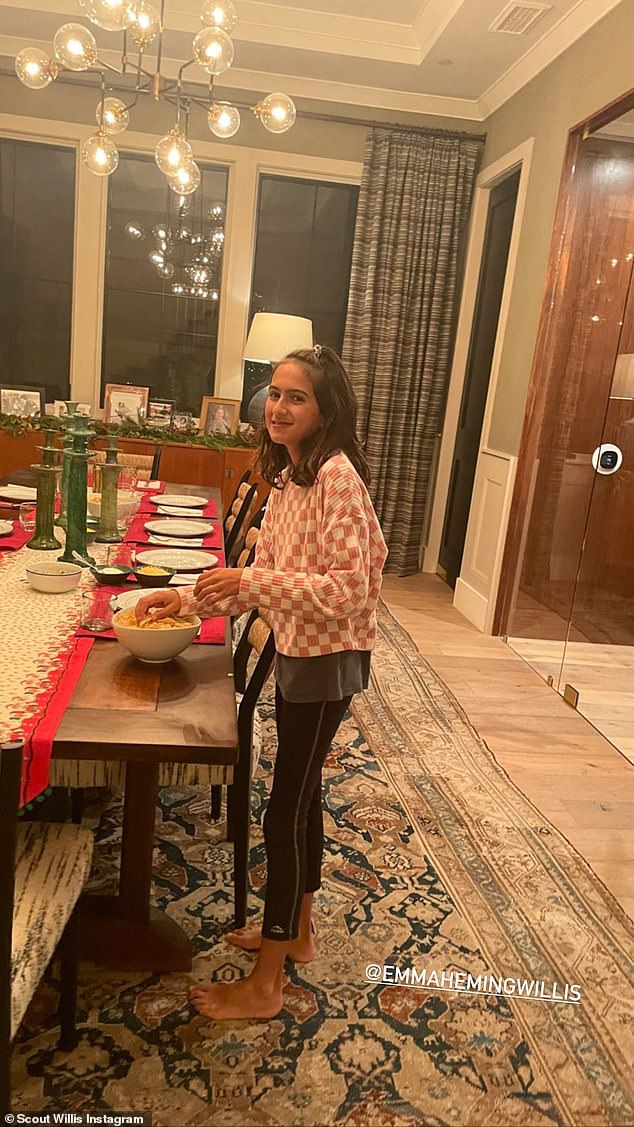 Snacks! She also posted a photo of her half-sister snacking on a bowl of chips

She also posted a photo of her half-sister snacking on a bowl of chips.

Bruce married Emma in 2009, and together they have daughters Mabel, 10, and Evelyn, eight.

Earlier this year, Bruce’s family revealed he would be retiring from acting due to his diagnosis with aphasia.

‘To Bruce’s amazing supporters, as a family we wanted to share that our beloved Bruce has been experiencing some health issues and has recently been diagnosed with aphasia, which is impacting his cognitive abilities,’ they wrote.

‘As a result of this and with much consideration Bruce is stepping away from the career that has meant so much to him. This is a really challenging time for our family and we are so appreciative of your continued love, compassion and support.

‘We are moving through this as a strong family unit, and wanted to bring his fans in because we know how much he means to you, as you do to him,’ they added. ‘As Bruce always says, “Live it up” and together we plan to do just that.’ 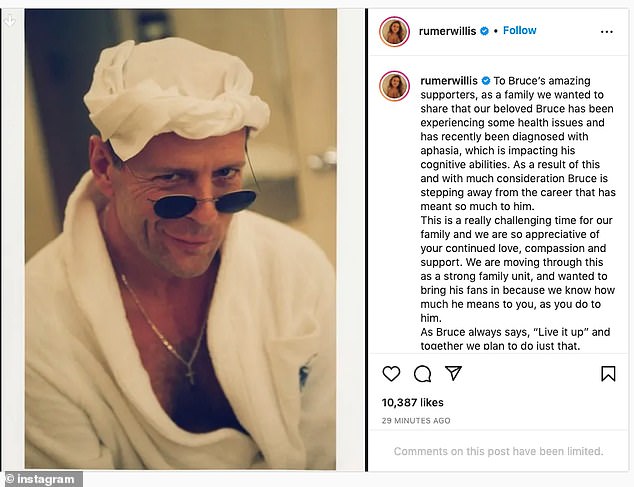 Earlier this year, Bruce’s family revealed he would be retiring from acting due to his diagnosis with aphasia