Al Pacino’s ex Beverly D’Angelo has revealed her first husband Lorenzo Salviati happily divorced her so she could be with The Godfather star.

The actress, 71, who was in a relationship with Pacino, 82, from 1997-2003, told People that Italian duke Salviati had branded the actor ‘fantastic’ when she admitted she fell in love with him in the 1990s and encouraged her to divorce him.

National Lampoon star D’Angelo and Salviati had eloped in 1981 and had an agreement that they could do what they wanted but ‘if there were any crises or anything, we’d come back together.’

She said: ‘I always thought the guys that I was with thought it was great that I was married because they knew no responsibility here! But when I met Al Pacino and told him about my little deal, he said, “Well, that’s crazy”‘. 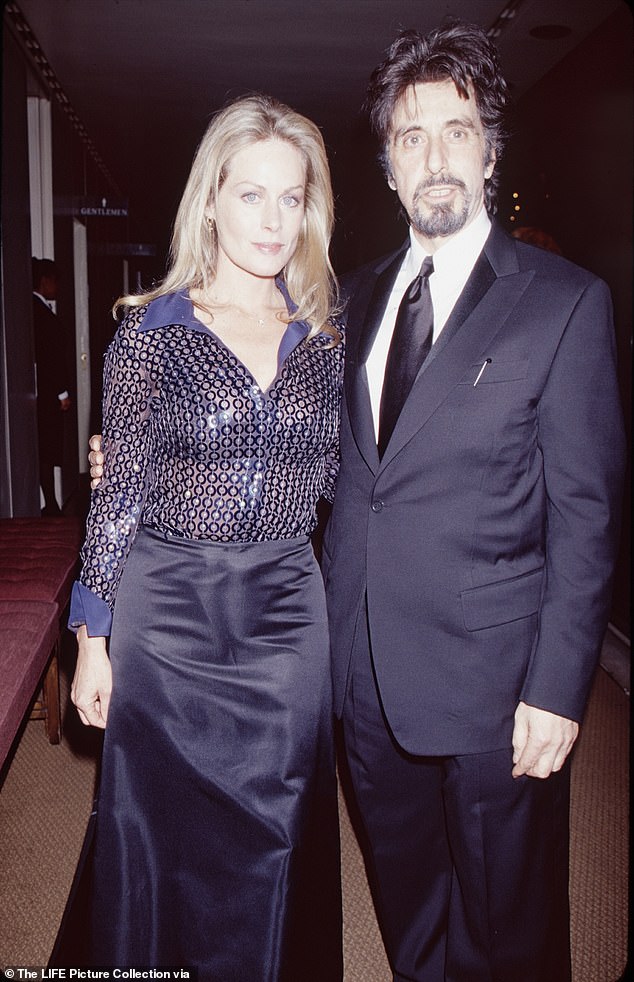 Hollywood couple: Al Pacino’s ex Beverly D’Angelo has revealed her first husband Lorenzo Salviati happily divorced her so she could be with The Godfather star (pictured with Pacino in 1999)

Detailing how she broke the news to Salviati, she continued: ‘I said, ‘I’m in love.’ He goes, “Oh, Beverly, who is it this time?” And I said, “Well, it’s an actor.” He went, “An actor? No, no, not an actor.” And I said, “I really love him and we’re talking about having kids and he thinks it’s crazy that I’m married and now I’m thinking it is too.”‘

D’Angelo, said Salviati continued to lobby against the split, before backtracking when he realized her new man was Pacino.

She said: He went, “Oh, that’s ridiculous. Who thinks this is crazy, this perfect relationship? Who is this actor?” You said, “Well, it’s Al Pacino.” He goes, “Al Pacino, he’s fantastic. I love him. We divorce!”‘

D’Angelo said the divorce was a simple and uncomplicated affair but years later has come to the conclusion that Salviati was in fact the love of her life. 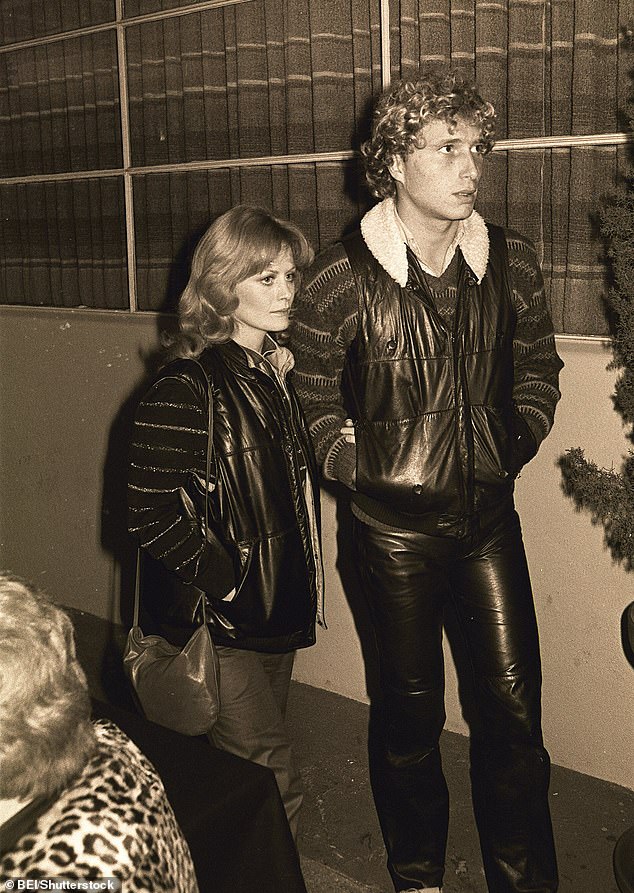 ‘Fantastic!’: The actress, 71, told People that Italian duke Salviati had branded the actor ‘fantastic’ when she admitted she fell in love with him in the 1990s and encouraged her to divorce him (pictured 1982)

During their six year romance D’Angelo and Pacino welcomed twins Anton and Olivia, now 21, via IVF, with the children arriving when D’Angelo was 49 and Pacino 61. The star said she would ‘always be grateful’ to Pacino for making here a mother.

Beverly made her bones as an actress in the 1970s and 1980s with such movies as National Lampoon’s Vacation and Hair.

In 1980 she scored a Golden Globe nod for her turn as country star Patsy Cline in Coal Miner’s Daughter, a biopic of the late Loretta Lynn.

‘After we’d known each other for three months, [Al] looked me in the eyes and said: “I want you to be the mother of my children,”‘ she told Closer Weekly in an interview when the twins were 16. ‘That’s all I had to hear.’

The sweet talk turned into slings and arrows after the romance fell apart and Al and Beverly embarked on a vicious custody battle. 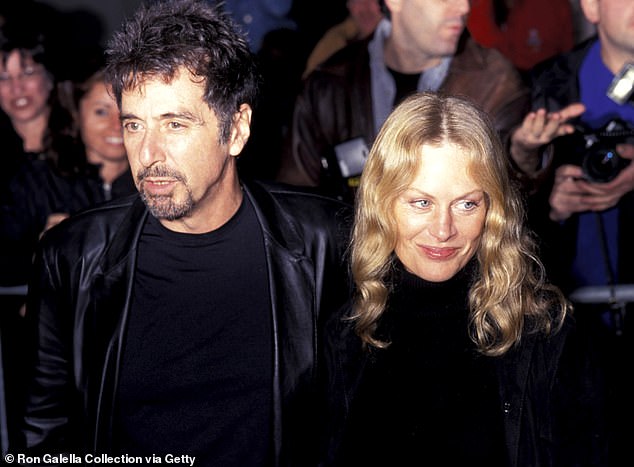 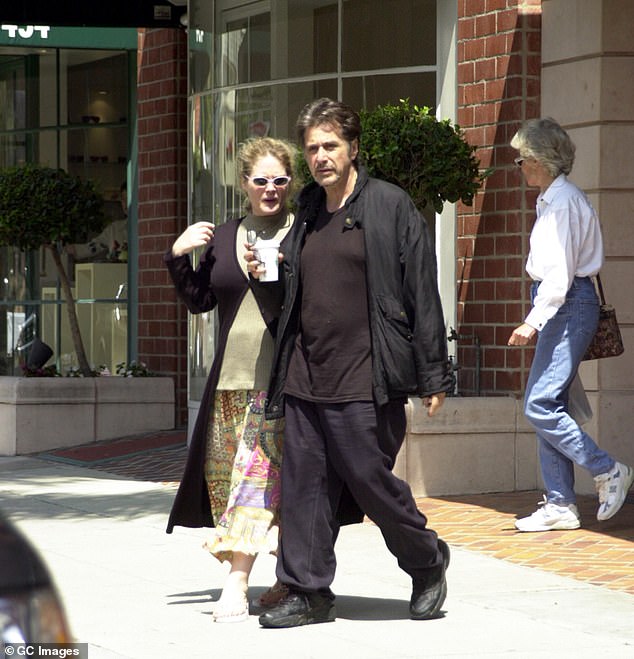 Expecting: During their six year romance D’Angelo and Pacino welcomed twins Anton and Olivia, now 21, via IVF (pictured 2001 while pregnant with the twins)

Beverly’s spokesperson denounced Al in the New York Post as ‘a controlling, harassing man who has never changed a single diaper.’

Al’s lawyer Martin Wasser was similarly venomous, alleging: ‘Beverly continues to use the kids in a way that almost makes them hostages. We sometimes joke that we are dealing with a baby rental company. For every extra hour Al wants to spend with the children, she wants to be paid more money.’

Eventually they managed to settle into an amicable relationship as they brought up their children over the past couple of decades.

‘The key thing is creating a new history, and moving on from whatever dissolved that relationship to the new one of co-parenting,’ she said.

‘The most important thing I’ve learned is how vital acceptance is. We all have a desire to change things that we don’t like, but you can’t change another person.’

Since her split from Al, she continued to act in such films as The House Bunny and Harold & Kumar’s Escape From Guantanamo Bay.

In recent years she featured in a number of smaller features like David O. Russell’s Accidental Love and Robert Schwartzman’s The Unicorn. 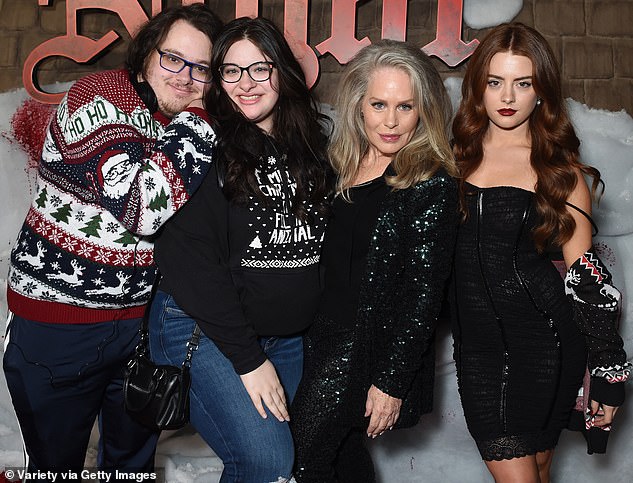 Family: D’Angelo is pictured with their twins Olivia and Anton, 21, and niece Courtney at the TCL Chinese Theater for the premiere of her Christmas movie Violent Night last month