The bulk of the major equity indices continue in near-term downtrends with only two in neutral patterns. Meanwhile, the data remain largely neutral and lacking any strong implications that the correction from the March rally highs has been completed.

So, while some of the index charts have caught our attention regarding possible bullish “inverted head-and-shoulders” patterns, there has yet to be enough evidence presented to imply that the current correction has been exhausted. 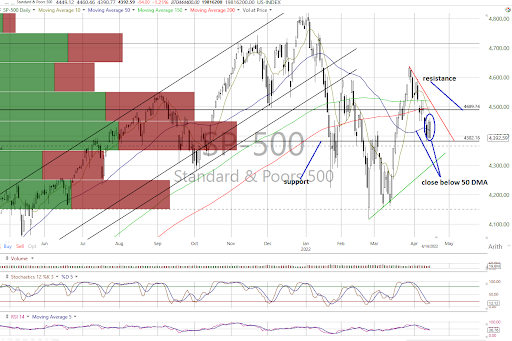 All major equity indices closed lower Thursday with negative internals on the NYSE and Nasdaq on lighter trading volumes.

Sellers stayed in control into the close leaving all but the Dow Jones Transports at or near their intraday lows.

On the negative side, the Nasdaq 100 closed below support while the S&P 500 closed back below its 50-day moving average. Thus, the near-term trends remain bearish on all but the DJIA and Value Line Arithmetic Index, which are neutral.

Slight positives are coming from bullish stochastic crossovers being registered on the DJIA and Value Line index.

Market breadth remains less than optimal, however, with the cumulative advance decline lines for the All Exchange and NYSE as the Nasdaq’s remains negative.

Digging Into the Data

The detrended Rydex Ratio (contrarian indicator) declined to -0.29 but is also neutral versus its prior bullish implications near the March lows.

The 10-Year Treasury yield closed higher at 2.83%. We view resistance as 2.88% although it is far enough back on the charts that it may not be a very effective barrier. Support is 2.41%.

The correction from the March rally highs has yet to show important signs of abating. Other than the bullish stochastic crossovers noted above and investor sentiment remaining fearful, there has yet to be enough of a shift in the weight of the evidence to imply the correction is complete. Also, the potentially bullish inverted head-and-shoulders chart patterns need further development to suggest their signals have a high degree of validity.

Get an email alert each time I write an article for Real Money. Click the “+ Follow” next to my byline to this article.