Skip to content
Two dangerous storm cells are lashing Queensland as the state embarks on a mammoth flood clean-up operation.

The Bureau of Meteorology (BoM) has issued warnings for “giant hailstones”, intense rainfall and damaging winds as storms hit Ipswich and Brisbane this morning.

Brisbane, Gold Coast, Toowoomba, Sunshine Coast and the Scenic Rim have been placed on alert, with the areas not yet out of the woods regarding wild weather.

Queensland Fire and Emergency Services Deputy Commissioner Mike Wassing said there were three types of operations concurrently being carried out.

“We’ve got the large floodwater operations … we’ve still got a number of tasks of support and resupply occurring with those areas and those communities,” he said.

“Then we have a massive clean-up.”

A significant storm has hit Beerwah and Landsborough areas, with roads saturated and a number of trees uprooted.

Fallen powerlines have scattered roads and several properties are without power.

Residents have attempted to chainsaw their way out of their homes as trees fall across driveways.

Father-of-two Sean told 9News he sheltered his two children under the doorway when the storm cell hit early this morning.

“It felt like a cyclone, it was a little scary,” he said.

“We got the kids up and put them under the biggest doorframe we had.

“We can see the massive trees behind us, which just missed our bedroom, so lucky we got up when we did.”

Giant hail up to six centimeters in size has pelted down in the rural town of Dalby, north-west of Brisbane, with wind gusts of 93km / h recorded.

Brisbane is expected to have about 100mm of rain bucket down as the storm cell hits throughout today.

Garbage and debris can be seen floating down the streets of the Brisbane suburb of Auchenflower, with residents in disbelief over the disaster.

Millward was in Auchenflower when water started pouring from stormwater drains lining the street.

“There’s separate systems popping up. One slammed into the Sunshine Coast this morning, and we’re hearing reports that homes have been destroyed in Landsborough and there’s huge hail there,” she said.

She said bone-dry streets were flooded in just half an hour after a fierce storm tore through, with 48mm falling in just 30 minutes in Brisbane.

“These streets were completely dry. There were piles of people’s belongings that they’ve spent hours and hours picking out from their flooded homes,” Millward said.

“They were all lined up ready for the council to collect as they were arriving here, council were getting ready with their bobcats then the rain came teeming down, and these properties were flooded once again.”

Floodwaters were seen rushing into homes, with one family only moving into their new home just last week.

They were forced to evacuate as floodwaters rose.

“I can not believe this is happening again,” the woman yelled from her balcony.

Residents have been told to stay on alert and listen out for evacuation warnings. 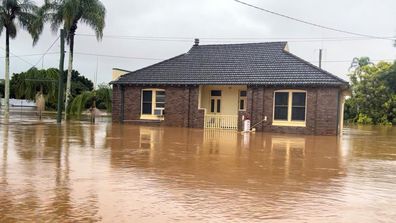