Skip to content
Thousands of people in north west and south west Sydney were told to evacuate overnight, as historic weather – which has already killed ten and wrecked thousands of homes and businesses further north – intensifies.
Last night, the SEE YA told people in parts of Windsor and surrounding villages including Pitt Town and Richmond lowlands to leave by 11pm, warning after that would be too late as the Hawkesbury-Nepean river system was hit by the deluge.

The Hawkesbury River started flooding North Richmond in the early hours, with parts of Penrith also starting to flood with predictions of worsening conditions including for the town of Windsor.

South west of the city people in parts of Georges Hall, Chipping Norton, Lansvale, Milperra, Moorebank, Warwick Farm, as well as parts of Camden were ordered to leave by 3am.

Officials warned the areas were facing flooding similar to March 2021, when hundreds of homes were wrecked by floods.

But some areas around the Hawkesbury could be even worse hit this time.

NSW SES bosses admitted the situation was worse than expected.

“It is a very dire situation at the moment,” SES Commissioner Carlene York told A Current Affair.

“It’s more serious that what we had anticipated or what the forecast was.

“The Warragamba Dam has started to spill across the state, we’ve got 31 evacuation orders out [and] seven evacuation warnings.

“We’ve put out an order around the Redman Dam which is near the Hawkesbury River for those houses downstream, because there is a chance it may burst.”

And those evacuation orders and warnings only increased across the night, with 116 NSW SES alerts in place across the city and surrounds.

Picton and Menangle in Macarthur, and Narrabeen on the northern beaches are also on alert.

People on the NSW South Coast and Illawarra are also being told to prepare for possible flooding.

Up to 80 and 120 mm of rain within six hours is likely to fall, forecasters said- with up to 200mm possible in some spots. 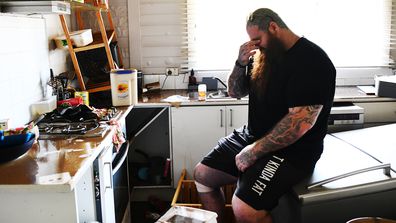