Skip to content
Queensland is bracing for another day of severe weatheras dangerous flash flooding lead to multiple rescues around the state.

The Bureau of Meteorology (BoM) has issued a fresh storm warning for people in parts of Gympie, Somerset, Sunshine Coast and Noosa Council Areas.

“Intense rainfall that may lead to dangerous and life-threatening flash flooding is likely.”

Today reporter Jessica Millward said a rescue is unfolding in Nambour on the Sunshine Coast.

It’s understood the driver of a van became trapped by floodwater. Swiftwater rescue crews are on scene.

Millward said the rescue happened in Childers, after a driver tried to go through a creek.

“He’s now clinging to a tree waiting for emergency services to get to him. Car washed away,” Millward said said earlier on Twitter.

Millward was also on the scene at Rocksberg near Caboolture where a driver made a lucky escape after driving through floodwaters.

Sharing a photo of a white car partially submerged she wrote; “Very lucky escape for the driver of this car after it slid into a creek near Caboolture.

In once live cross floodwaters were seen rising behind Millward.

It’s understood the driver called emergency services but managed to free himself from the vehicle.

Deputy Commissioner Mark Roche from the QFES said they’ve attended more than 30 flood rescues and been “to well over 100 SES tasks in the 24 hours”.

“It’s a busy time for our staff and volunteers,” he said.

“I do not know the details of all of the incidents, but I would suspect that people are not listening to the message; ‘If it’s flooded, forget it’.

“People are possibly getting surprised by the water on the roadway, but with this weather, people should be prepared.”

A large part of Queensland stretching from the north of Bundaberg to the south of Brisbane is bracing for more torrential rain.

Severe weather and storms warnings are in place for parts of Wide Bay and Burnett and Darling Downs and Granite Belt Forecast Districts.

“A strong upper low is combining with a deepening surface trough and a developing embedded low to produce intense and slow-moving thunderstorms,” ​​the Bureau of Meteorology (BoM) wrote.

“A separate Severe Weather Warning is also current for this area.

“Severe thunderstorms are likely to produce intense rainfall that may lead to dangerous and life-threatening flash flooding in the warning area over the next several hours.

“Locations which may be affected include Eidsvold and areas southwest of Eidsvold as well as areas between Seventeen Seventy and Bundaberg.”

A number of flood watches are in place across the state with Eyre Creek, Georgina River the lower Burnett River, Stuart and Boyne Rivers, Mary River, Tinana and Six Mile creeks, the Paroo River and the Stanley River of the most concerned.

Amid the threat, there are fears the city of Gympie could split the town in two.

The area has been hard hit with rain, receiving the state’s highest rainfall total – Mt Wolvi, near Gympie, recorded 425mm of rain in the 24 hours to 9am on Wednesday.

The second death of the flood emergency was also recorded.

The body of missing motor cyclist Phil Lambert, 54, was discovered at Cedar Pocket, in the Gympie Region.

It’s believed the father of three had not seen the rising floods when driving through the area on Wednesday morning and was hit by a torrent of rushing water. 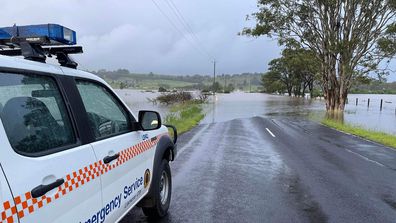 It comes after the body of woman was found in her submerged vehicle at Belli Park, Sunshine Coast.