By Calum Muirhead For The Daily Mail

Segro, the UK’s largest commercial property firm, saw profits surge as a boom in online shopping drove up demand for its warehouses. 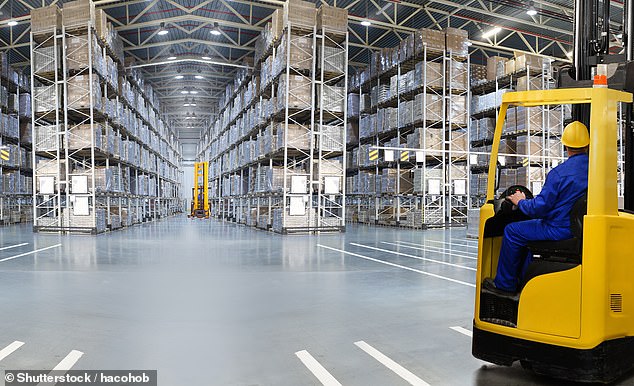 Boost: Warehouse owners like Segro were supported during the pandemic as retailers scrambled for extra storage space

Warehouse owners like Segro were supported during the pandemic as retailers scrambled for extra storage space to cope with the rising numbers of online delivery orders.

Extra paperwork and customs checks brought on by Brexit have also proved beneficial as firms increasingly need to store goods while they are processed.

Segro boss David Sleath also flagged that ‘new names’ were emerging in the ecommerce industry such as rapid grocery delivery services, which was resulting in ‘very high levels’ of demand as more companies fought over storage space.

As a result, Sleath said there had been a ‘significant increase’ in the company’s rent roll over the past year. Victoria Scholar, head of investment at Interactive Investor, said ‘there has been a boom in demand for industrial property rentals, driven by the surge in ecommerce, a shift that Segro has benefited from.’

Analysts at broker Liberum branded the results as ‘excellent’ and predicted that low vacancy rates ‘should drive further strong rental growth over the next year’.

However, AJ Bell analyst Danni Hewson warned that over the course of the year retailers were likely to face ‘an increasingly difficult’ choice between how much of the rising costs could be passed on to customers and how much pain they could endure themselves.

Shares in UK Oil & Gas (UKOG) soared by more than a quarter after a woman who opposed the company’s drilling in Surrey lost her appeal.

Sarah Finch had challenged the legality of Surrey County Council’s 2019 decision to allow UKOG to drill more wells at the so-called ‘Gatwick Gusher’ in Horse Hill in Horley.

Two of three judges at the Court of Appeal ruled the council had acted lawfully – though Finch is now considering launching a Supreme Court appeal.

The Kuwaiti logistics group which has been pursuing British airport services firm John Menzies upped its stake yet again.

Despite having its 510p-pershare rebuffed by the board, National Aviation Services (NAS) has been snapping up shares.

On Thusday, NAS bought another 5.3m shares for 605p each, meaning it now owns around 19 per cent of Menzies.

Some links in this article may be affiliate links. If you click on them we may earn a small commission. That helps us fund This Is Money, and keep it free to use. We do not write articles to promote products. We do not allow any commercial relationship to affect our editorial independence.